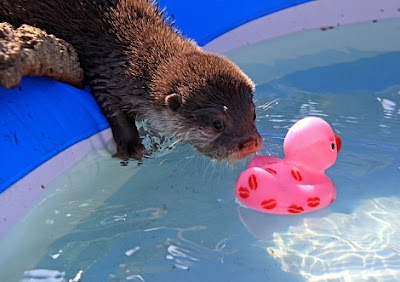 After the heartbreak of that last post on anteaters, I am feeling particularly cruel towards fans of the conventionally cute. So today it's their turn: I am going after otters.

There are various nasty facts I could relate about otters, but let's concentrate on a recent paper in the journal Aquatic Mammals that was reported on last month by Discovery News.

This study described some interactions between sea otters and baby harbor seals in California. Before we go on, let's remind ourselves of how adorable a baby harbor seal is, pictured here with its loving mom courtesy of Zooborns: 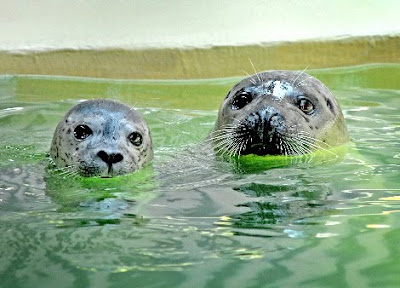 Are you picturing those babies frolicking in the waves together? Good. So now it's time for me to tell you how male sea otters were observed violently raping juvenile harbor seals - and not stopping until the victim was dead.

Here's just part of a description of one incident:

...The sea otter gripped the harbor seal’s head with its forepaws and repeatedly bit it on the nose, causing a deep laceration. The sea otter and pup rolled violently in the water for approximately 15 min, while the pup struggled to free itself from the sea otter’s grasp. Finally, the sea otter positioned itself dorsal to the pup’s smaller body while grasping it by the head and holding it underwater in a position typical of mating sea otters. As the sea otter thrust his pelvis, his penis was extruded and intromission was observed. At 105 min into the encounter, the sea otter released the pup, now dead, and began grooming.

The authors observed 19 similar events in Monterey Bay between 2000 and 2002, which in at least 15 cases ended up with dead seals.

This actually should surprise no one: in fact, these male otters aren't treating the seals any differently than they treat their own. They will also mate with a female otter till she's dead, and indeed, during the study period, 11 percent of the dead female otters examined appeared to have succumbed to such attacks.

This behavior also should surprise no one because it's not the first time it's been observed. In fact, I've linked to this sort of story before, but I was kind enough not to rub your face in it. But if you didn't click last time, and you still have any illusions left about sea otters, read this page from the ironically named Love Lab of marine biology.

He makes it sound amusing... but that doesn't make it any less wrong.

PS: The photo up top is actually an Asian small-clawed otter (via Zooborns.) But you couldn't tell the difference, right? So take this whole post as a lesson about falling in love with animals that you don't know nearly enough about.

Email ThisBlogThis!Share to TwitterShare to FacebookShare to Pinterest
Labels: otter