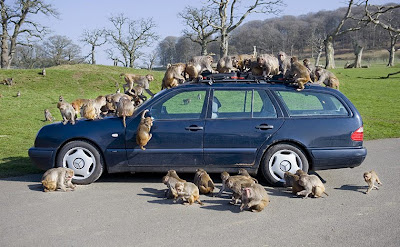 It's bad enough, as we saw last time, when animals have the nerve to use our transportation technology to get around.

But for some creatures, an expensive car is nothing more than an invitation to vandalism. Nowhere is this more true than at Longleat Safari Park in England, known for a troop of macaques that do their best to dismantle the vehicles of visitors at the drive-through zoo.

Due to contruction, however, the monkeys been without victims for the last two years. You'd think the management would take this as an opportunity to break them of the habit, but they did exactly the opposite, as one staff member explained:

“We decided to give them their very own car to get them back in training for the new season. It’s clear to see from our test run however, that monkey mischief is still very much front of mind and they plainly haven’t forgotten their fondness for cars!”

The "test run" involved the monkeys given free range over their own Mercedes, which they proceeded to dismantle, as the zoo website describes enthusiastically:

The new toy was delivered last week and the 100 Rhesus monkeys soon set about tearing it apart with gusto.

The cheeky monkeys jumped on the bonnet, ran off with their very own wing mirror and rolled hubcaps gleefully away to play with.

They even rifled through luggage strapped to the top of the car, and tried on human clothes for size.

The little terrors admired their own reflections in the mirror, and even tried to pull off the Mercedes badge on the bonnet as a souvenir of their day!

Am I the only one who reads this and wonders, are the inmates in charge of the asylum?

You can see more photos of the madness from The Guardian here.