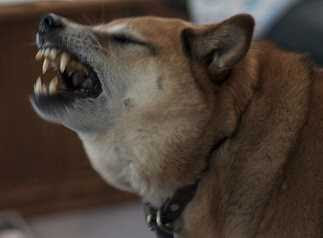 - At the San Diego zoo, a keeper was rushed to the hospital after being bitten by panda Bai Yun. The LA Times notes:

Despite their cuddly appearance, pandas, in the wild or in captivity, are known for quick changes of temperament that can lead to aggressiveness, zoo officials said.

You've been warned. (And it's not the first time.)

-In Israel, a model famous for her ample artificially enhanced bosom was bitten by a snake during a photo shoot. Then, on the Internet, the story that the snake had died of silcone poisoning went viral.

However, the remark about the snake dying was actually a joke, as explained by the original site that started it all.

Here at this blog we can understand the impulse to jump on the rare story where a bad animal got what was coming to it, but check your sources, people.

(You can see video at that link, if you're into that sort of thing, you sicko.)

-Remember the dog we reported on earlier this month who ate three of his owner's toes?

Well, that cute little Shiba Inu is up for adoption!

Don't knock each other over in the rush!