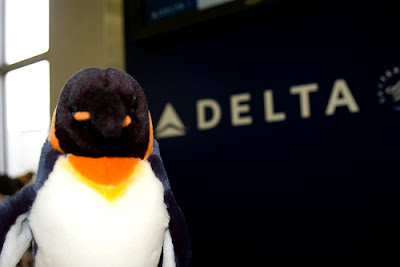 Any successful species has to evolve suitable methods of travel. And some animals have come up with solutions that make humans jealous: who hasn't wanted to be able to fly without submitting to the indignity of airline security and cramped seating? Or swim or run effortlessly for hundreds of miles?

Humans, reduced to two legs and not even a tail for balance, have had to make up for these evolutionary sacrifices via technology. And some animals that don't know their place seem to think they can have their wings and take our planes too. We've seen this before, but recently there's been a rash of new cases:

-We saw a case of snakes on a train recently in Boston; now, in Poland, a three and a half foot long serpent escaped from a shipping cage and caused a panic, with passengers reportedly climbing on the seats and then fleeing when the train reached the station, where police and fire personnel captured it.

-You might feel those snakes can't be blamed, perhaps, but in England, there was much excitement when a ferret turned up at a train station on its own. Its owner was located living only a couple of stations down the line, so it did not make the whole 500-mile journey from London as intially suspected. However, there is no evidence that it paid for a ticket for a ride of any length, so it's still stealing.

-Most presumptuous of all of these, a penguin from Sea World took a plane flight, and strolled down the aisle while keepers lectured about it to the captive audience. And in case that hadn't sufficiently gone to the bird's head, video of the incident has over 450,000 view on You Tube as of this writing.

Still, at least those animals are using our technology for its intended purpose. Come back Thursday when we'll be perfectly indignant about some monkeys and their human enablers.