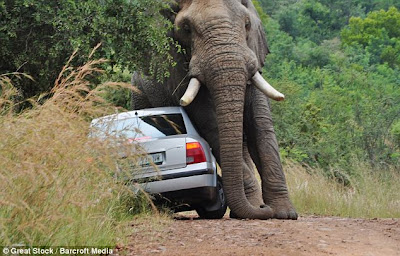 Turkeys aren't the only animals that are after our vehicles. We've seen bears try to steal them, dogs crashing them into storefronts, driving them over their owners, and trying to eat them, and all kinds of wildlife blocking traffic and causing collisions.

And no matter how large or small the creature, it can find a way to do damage. On the one extreme you've got the elephant in the photo above that flipped a car into a ditch (see the rest of the photos here.)

On the other, Mazda recently recalled 65,000 cars when it was discovered that spiders had taken a fancy to nesting in the fuel system of their Mazda6 sedan.

The yellow sac spiders were building webs in vent lines, and it was feared that the blockage could build up pressure in the fuel tank, causing cracks and perhaps even fires.

It's still unknown how the spiders got in or why they prefer this model of Mazda, but don't be reassured by the specificity of their taste in vehicles: now they've been found in some Hondas as well.

So before you rest easy that your make and model hasn't been involved in these reports: have you actually looked in your engine's fuel system lately?