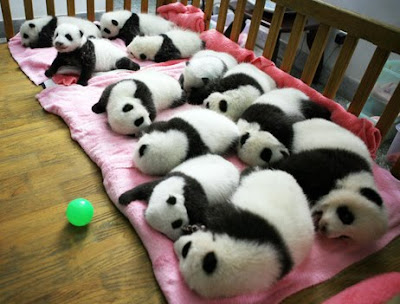 When one bad animal is pitted against another, you might think I'd want them both to lose. But in this conflict, the choice of side is a black-and-white one.

This blog has often bemoaned the inexplicable human obsession with pandas. At zoos, they do nothing but sit there while people flock to see them. There is even scientific evidence that the panda is basically a crummy animal. One researcher recently commented that, looking at its bamboo-digesting capabilities:

"I see a very badly adapted animal. The main way the panda has adapted to the low-quality diet is not via microbiota, like the vast majority of other animals, but by eating 15 hours per day."

But boring behavior and inferior biology are helpless to counteract the effects of a cute black and white face with those adorable little eye patches. The urge to produce baby pandas is so overwhelming some keepers are even willing to make fools of themselves dressing up in panda suits to raise them.

And this obsession has serious consequences. As we've noted before, not even scientists are immune to the lure of the cute animal, with far more attention going to conservation of conventionally attractive, big furry creatures.

In a recent example of this bias, the National Zoo recently got a donation of 4.5 million dollars to its panda breeding program. One wonders how many entire species of, say, critically endangered frogs, could be saved from extinction with this amount of money. Instead, it'll be used to produce a baby animal that, judging from photos like the one above, we seem to have plenty of - in China where the darn things belong.

So we're heartened by a recent story out of Scotland, where the Edinburgh Zoo recently acquired a pair of pandas, with great fanfare mostly drowning out the few voices of reason proclaiming them a big cuddly waste of money.

But some zoo residents are expressing their opinion in the clearest and most un-ignorable way possible. Rockhopper penguins are gathering along the edge of their exhibit, which looks out over the long line of vistors waiting to see the pandas, and pooping on them:

A 41-year-old, who was standing in the panda queue on Sunday said: "We were queuing to see the pandas when a man in front shouted out in surprise that his jacket had been hit by a big dollop of penguin poo.

It just missed me and my family and it was really oily and stank of fish. It was disgusting."

The zoo is, of course, planning to build a barrier to protect the panda-obsessed, but we are pleased to praise these penguins for their stinking salvos in the anti-panda cause.