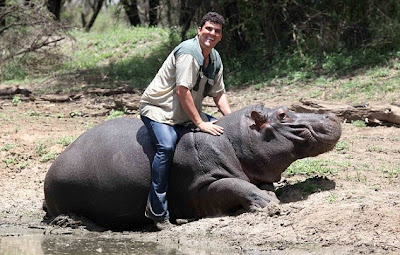 A quick look at a few stories that on the one hand may deserve more in-depth coverage, but on the other hand, can be summed up in one quote:

-It was recently announced that the city of Berlin will be allowing a wild boar hunting season. If you've read the book, you know that wild boars in Europe have been invading cities, often charging into homes and buildings and chasing innocent humans through the streets. Why, you might wonder, don't these animals stay in the forest where they belong? One expert says there's a simple explanation.

In the forest, the food is not that interesting. In the city, there is an entire menu. The boars are like the French. They like good food.

-Earlier this year, a South African farmer was in the news boasting of his relationship with his pet hippo, frolicking for the camera as in the photo above. He summed it up like this:

Perhaps he was right, but not in the way he seemed to mean: Last month, he was found dead after his beloved hippo attacked him.

-And finally, if you think you're safe because you live at a great distance from wild boars and hippos: From an excellent story in Esquire - not one of my usual bad animal news sources - by a man whose house was infested with ants, here's what he learned about them:

They’re not in your underwear by accident. They’re nation-building.