Another noble reputation bruised by science 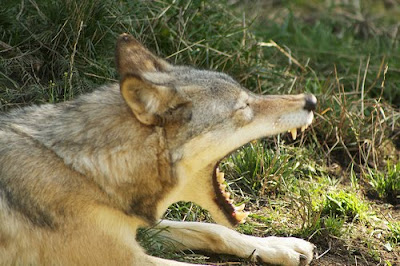 The PR machine for wolves has been in full swing for many years now. Their former reputation as a ruthless killing machine has been largely replaced by the story that this animal is family-oriented, cooperative, and highly intelligent. "It is an animal that cares for its sick, protects its family," say some of its defenders, and is "capable of not only emotion but also real compassion." They are "extremely devoted to their pack." It's even been argued that that wolves have a sense of right and wrong.

Yeah, yeah. You know where this is going, right?

Two pieces of recent research show that the intelligent, cooperative behavior of wolf packs might not be all it's cracked up to be:

-The hunting behavior of wolves, while it seems complex to an observer, might not require a high degree of intelligence after all. Researchers programmed a computer to reproduce the behavior of a hunting pack, and it turned out that all it took was two simple rules:

-Larger packs of wolves aren't better at hunting than smaller ones. You know why? Because most wolves are lazy freeloaders. No matter how big the pack is, only four wolves do any of the work. The rest just hang back and let those four do all the hard, dangerous stuff, then share in the kill. What's more, the ones who work the hardest are the one who have the most to risk - the ones with babes at home.

These animals "superficially appeared to be cooperating," say the researchers. But apparently the real reason they are so "devoted to their pack" is that they are getting something for nothing.

Of course, it's only fair to say that for a lot of us humans, our work also consists of following mindless rules, and God knows many of us only superficially appear to be cooperating. All I'm saying is, let's just remember that even the most allegedly noble animals are no better.