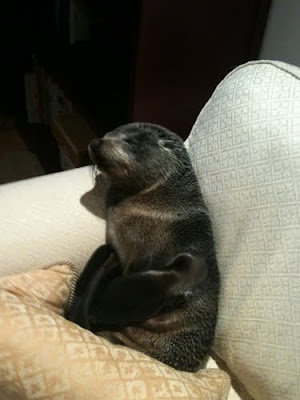 It's a time of year when traditions take center stage. Some prefer precise repetition, with every ornament on the tree in the same place; others want to push the envelope, stuffing the turkey with new-fangled ingredients instead of using Mom's old-time recipe.

Bad animal have traditions, too, and like us, some of them are old-school, and some are pushing the envelope:

-Dogs shooting their owners with guns: it's so common that it made it into the subtitle of the book - and they're not stopping now.

In Utah, a dog in a boat with some duck hunters jumped onto a shotgun and shot one of them in the butt. The man was taken to the hospital, where he was treated and released. Those of you who object to hunting will no doubt be pleased by local news reports that "The dog and any ducks within range at the time of the accident were uninjured."

A more serious case occurred in Florida, where a bulldog named Eli in shot his owner in the thigh with a rifle while in a truck on a hunting trip. Reports called the shooting "unintentional" despite the fact the dog had to release the safety before being able to shoot the gun. The 78-year-old victim was shot in a major artery and and as of last Tuesday was still on a ventilator.

-Bears scavenging for garbage and even breaking into homes is nothing new, but they're taking it to a new level. I thought I was impressed by the bear in Vancouver that actually hitched a ride on a garbage truck (video here) until I read about the bear that had been living for weeks in a basement in New Jersey.

The animal had built a bed of leaves and branches and was ready for a comfy winter till a cable TV guy came to make a repair. He heard a growl and turned to find himself facing a 500 pound black bear:

"I just freaked out, threw my tools, ran out of the basement."

It took a hour-long chase for animal control officers to tranquilize and capture the bear. The homeowner plans to start keeping his basement locked, and maybe you want to check all your doors as well.

-Finally, what may be a new trend: we recently saw a seal trying to get into someone's house in Australia.

That one didn't make it, but seals seem to be taking this as an ongoing project, and the second attempt was a success. No doubt realizing our weakness for the cute, this time the seals sent a baby to perform the mission. After making its way from the water across busy roads, up a long driveway, under a gate and through the cat door, it made itself at home on a sofa.

Fortunately, they chose a victim that had more sense than most. The New Zealand woman at first thought she was hallucinating, then, she said:

"Then it looks at me with those huge brown eyes. It was so cute, but I didn't touch it because you don't with wild animals."