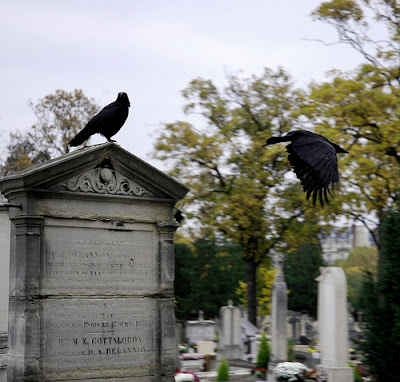 Some bad animals stick to tradition: there'll always be a place for the dog who bites the mailman. But they never stop coming up with new ideas as well, as demonstrated recently in a town in Norway.

For quite some time, candles left on the graves at a cemetery in Skagen had been mysteriously disappearing. Grieving relatives even begged the thieves to stop in the newspaper - which turns out to have been pointless, because the robbers can't read. They're birds.

The culprits were identified when someone finally realized there was a connection to another problem, this time at the airport across the road from the graveyard. The runway had long been used as a tool by seagulls: they drop mollusks on the hard surface to crush the shells so they can get at the tasty meat inside. But more recently, broken glass was being found all over the runway as well.

It turns out that crows and magpies steal the grave candles, drop them on the runway to break their glass containers, then eat the wax to fatten up for the winter. Now that officials know what to look for, the evidence is clear: "We can see traces of beak marks in the candles," one said.

On the one hand, we might reassure ourselves that these birds aren't all that smart, since they can't tell which candles are edible before stealing them: Electric candles have been found blinking on the runway as well.

But on the other hand, one has to wonder if the attraction of the runway is more than the hard surface, and whether there's a more sinister plan at work here. After all, leaving glass all over the runway where it can blow out airplane tires is a good way to ensure there will be more candles to steal - by sending more people to the graveyard.

Thanks for the tip and translation to Bruce Morén-Duolljá of Animals Behaving Badly's Scandinavia bureau.