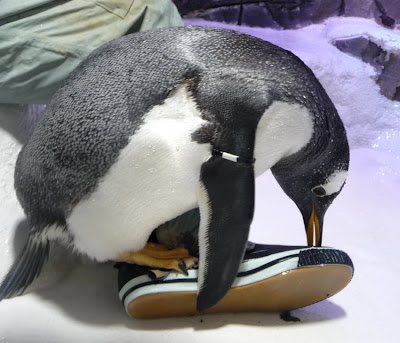 Another penguin soap opera is in the news, this time in Canada. The Toronto Zoo is planning to split up a pair of male penguins so they can do their duty to carry on the species.

Scientists hesistate to use human terms like "gay" for animal relationships, but the two are exhibiting the same courtship behavior as male-female penguin pairs, including a mating call similar to the bray of a donkey. (Hey, as long as it works for them, right?) Said one zoo official, "It’s a complicated issue, but they seem to be in a loving relationship of some sort."

Loving or no, unfortunately, these penguins are shirking their responsibilities. Their species is endangered, and their population in captivity needs to be carefully monitored to retain its genetic diversity. Penguins are moved around to different zoos for mating, and even heterosexual pairs may be split up if they're not considered a good genetic match.

These two penguins were brought to Toronto from Pittsburgh specifically to mate with two of their females, and it's not the ladies' fault that it hasn't worked out. "The two girls have been following them," said the zoo's curator of birds, "we just have to get the boys interested in looking at them."

We've seen gay penguin controversy before. The most famous case, of course, is that of the penguins from the Central Park zoo who had a much-banned children's book written about them.

But before you leap to this couple's defense with accusations of zookeeper homophobia, remember it's not like it's always humans who break up these relationships. We've also seen a pair of male penguins who raised a chick together - and then one of them left his mate for a female.

Penguins also sometimes neglect their reproductive responsibilities for even more inappropriate partners. That photo is of a German penguin who fell in love with a boot.

And scientists have suggested the penguin same-sex attractions are, yes, just a phase: in the wild, they eventually ditch them for an opposite-sex relationship.

But in any case, in the end, the zoo says that the separation will last only as long as breeding season: once the males have gotten a female pregnant, everyone can go ahead and do whatever they want. We'll find out then exactly how serious these boys were about their forbidden love.