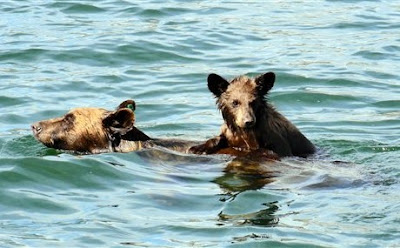 This blog is often a lone voice in the cause of outing cute animals as the hooligans and degenerates that they really are. So it's encouraging to see this story from none other than the Associated Press, which reveals the truth behind a well-publicized "aawwww" moment.

The adorable photo above, of a mama bear giving her cub a ride across a lake on her back, was taken by a retiree who was fishing in New Mexico. It was picked up by TV and the news and no doubt was the occasion of much cooing and exclaiming over the amazing maternal instincts of animals.

But New Mexico wildlife officials have revealed that this bear, identified by an ear tag, has "a rap sheet as long as her arm:"

Bear No. 56 grew up in the Sandia Mountains east of Albuquerque, turning to trouble in 2002. That’s the year she was picked up at least four times for raiding trash cans, chicken coops — and sometimes houses — in the small mountain community of Tijeras.

On her fourth recorded encounter with the law, Bear No. 56 was chased up a tree and tranquilized. After that, officers decided to relocate her to the Zuni Mountains, about 100 miles to the west.

One Rick Winslow, identified as the state's large carnivore wildlife biologist, is quoted as saying that this bear has covered an amazing amount of ground, and that what's even more unusual is that she was never euthanized after four and possibly five episodes of being relocated. The state's normal procedure for bears is "three strikes and you're out," and that means permanently out.

He says this like he had nothing to do with it, but isn't the state's large carnivore wildlife biologist exactly the person who should have been in the loop making these decisions? With all the scientists we've seen making excuses for bad animals, we think it's unfortunate that the AP didn't take a closer look at this official and exactly whose side he is on. Rick Winslow, we'll be keeping an eye on you.