More than just your bird feeder is at risk 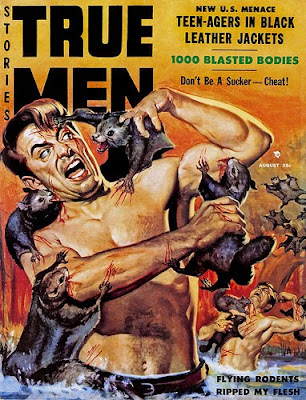 A couple of squirrels gained some notoriety on both sides of the pond recently.
Last month in St Louis, a squirrel got a huge amount of media coverage for interfering with baseball games - we'll just let a link to the animal's Wikipedia entry stand for all of it, describing its subsequent celebrity in song, on T-shirts and Twitter, etc.

At about the same time, TV viewers in Britain were shocked when they were watching a nice, family-friendly baking contest, and were treated to a clip of some nature footage - which included a a squirrel flasher: 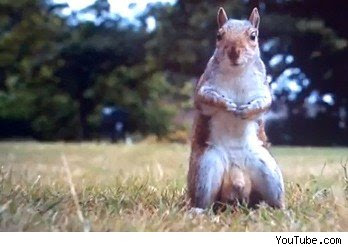 For those who were fortunate enough to miss this offense on the broadcast, it was still hard to avoid, because again the hooligan got all kinds of press.

Squirrels commonly interfere with more important things than entertainment. It was no effort at all to find enough stories of squirrels causing power failures to link every highlighted word in this sentence to a different incident.

And while the magazine cover illustration above may seem extreme, squirrels do attack people. One ran amuck in a town in Vermont earlier this year, and if you read the book, you'll find several cases of them attacking innocent children, sometimes in their own classrooms and playgrounds.

They also cause car accidents when do-gooders swerve to avoid them. In California, the result of one such incident was rather spectacular when the driver hit a fire hydrant instead: 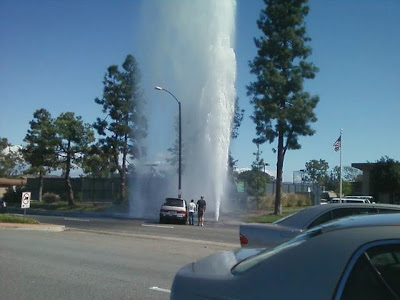 And yet some people even take these animals into their homes. A couple in Cornwall rescued a gray squirrel that had been attacked by a cat and nursed it back to health. They don't seem to realize that this can only end badly, despite the obvious evidence in the animal's addiction to Crunchy Nut Corn Flakes: "If she doesn’t get them she goes berserk and will run around the room jumping on my shoulder until she gets a bowl."

Not all squirrels wait for an invitation into your home, and one man in Sweden found that authorities not only didn't help, they stood in the way of his self-defense. A squirrel repeatedly broke in to his house and trashed the place, but it took two months for local government to decide it would be OK for him to attempt to shoot it - after he also gets permission from the police.

Don't forget that any gray squirrel in Britain is badly behaved almost by definition, since they're an invasive species that's driving the smaller, cuter red squirrel to extinction; grey squirrels now reportedly outnumber the native reds by 70 to one.

But in one part of Britain, they've got the right idea what to do about the invasion of grey squirrels, joining a trend we've seen before: They're eating them.

A company in Cornwall is using them in the filling for Cornish pasties, the traditional local meat pie. The owner points out that squirrel meat is environmentally friendly and, of course, free range: 'At a time when people are looking closely at food miles and ethics, grey squirrel is the ultimate in environmentally sustainable meat.'

But they don't attempt to hide the element of revenge: All profits from the sale of the meat will be donated to the Red Squirrel Survival Trust.

Email ThisBlogThis!Share to TwitterShare to FacebookShare to Pinterest
Labels: squirrels