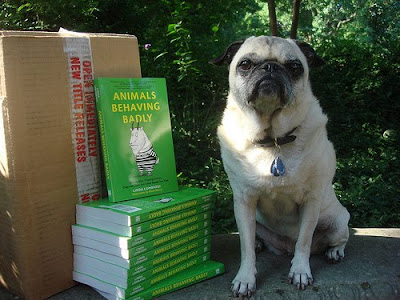 Used to be, a book publisher was the kind of animal that carefully nurtured and protected each of its precious young. But the modern media ecosystem has forced the industry to evolve. Now a publisher lays a thousand eggs, dumps them in the pond, and gets on with its life, figuring that at least one will escape predators, find enough food, and successfully live to adulthood.

So authors are pretty much on their own to fight for the lives of their creations. But hey, I've learned about looking out for number one from the best: ANIMALS.

Animals will never give you something for nothing. You want a dolphin to jump? You pay it with a fish. You want a rampaging crocodile to stop chasing you? Let it take the slowest member of your group and you've got a deal.

So sure I'm doing a book giveaway, but only if I get something out of it too. Hey, at least I'm sharing. You think that bear would give you any of that stolen pizza?

I'm giving away three copies. One is really something for nothing: it will go to a commenter randomly chosen by that pug in the photo who is totally unimpressed with that box of books. Because, you know, we are humans here, and we do have a little bit of civilization.

But TWO books will go to people who have helped to spread the word by sharing a link to this blog somewhere on the Internet telling thousands of strangers about it.

The winners of those two copies will be chosen by me in whatever capricious manner I deem appropriate, inspired by the cruelty and unfairness of the natural world. It might be the post that gets me the most traffic. It might be the post with the funniest added comment. It might be a post by one of my relatives who is also passing on some of my genes to posterity. I'll do whatever feels good at the time, just like an animal would.

Want to play? You've got till November 14th. Go forth and tell the world about bad animals and put the link in a comment here to prove it. Or if you're too shy for that, just leave a comment, and hope for the best, because we're human, and sometimes we are nice to the weakest member of the pack.

(Either way, make sure you include a way for me to contact you, an email address or a link to someplace where a lazy animal can find one without too much trouble.)

Oh and hey: While you're posting those comments, listen to me talking about the book on the radio program The Animal House.