This is how deer thank you 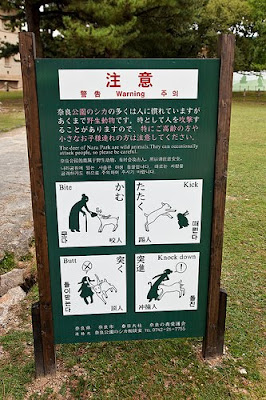 Are you still dubious about the risk posed by deer, even after reading last week's post about head-butting, doorbell-ringing, home-invading Bambis? Maybe you thought the man with the deer in his workshop was being overly dramatic when he said "I was just defending myself. It was either me or the deer."

Well, perhaps exactly when I was writing that post on Sunday evening, a man in Canada was killed by his own herd of "tame" deer.

The man went out to feed the deer and when he didn't return home, his wife called police, who found him dead among "signs of a struggle so violent" that the body was missing a boot and a sock.

While it's important to note that any large hoofed animal can do considerable damage at any time of year, a police spokesman described the particulars of the situation the victim had faced in graphic detail:

"Adult male deer this time of year have significant antlers and in the wild they are very adept at using them to fend off predators —coyotes, foxes, rabid dogs, what have you."

He said the bucks use their racks to pin their adversary to the ground, then put all their weight on them.

"All their weight is on their neck and they'll grind. Those antlers are sharp and they'll poke skin and muscle tissue very easily."

And apparently the fact that you're bringing them food - and have been feeding them all their lives - doesn't eliminate the risk. So don't let down your guard around those those big brown eyes.

Another deer warning sign, thanks to Flickr user s.yume, this time from Nara, Japan where they let these animals roam freely in the streets. So add that to your list of places not to visit in Japan along with the monkey park in Oita from last time. Maybe you should stick to Tokyo - wait, except for the crow attacks...

Email ThisBlogThis!Share to TwitterShare to FacebookShare to Pinterest
Labels: deer