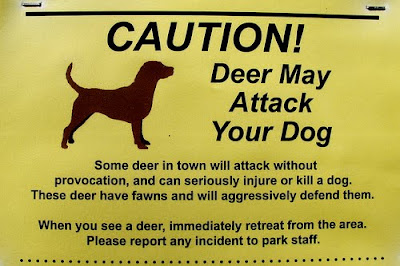 Sometimes I feel ambivalent about covering animals such as the bears in the last post. Surely nearly everyone knows to be afraid of bears, and there's much higher profile media putting its weight behind bear awareness. But so many are unaware that animals with a cute and cuddly reputation are just as likely to commit violent acts - and they're coming after us.

Take deer. Sure, they take a toll on our gardens, but they're so lovely and graceful and who can resist those cute spotted babies with the big Bambi eyes? Surely the only danger we have to worry about is hitting them with our cars, right?

Well, to start, deer are a threat even when your car isn't moving. In Massachusetts, one walked up to a vehicle and head-butted a man through the open window. “I saw cartilage or what I thought was cartilage -- a bone and blood just gushing all over my face,” he said, and ended up in the hospital for seven stitches and treatment of a broken nose.

But never mind cars: deers are walking right up to people's homes. An Ontario woman is being harassed by deer who ring her doorbell. Modifications to the doorbell button have not thwarted them, and when one morning these hooligans awakened her so early that she came to the door with her cane and cursed at them, the offending doe merely responded by snorting and scratching the ground threateningly.

Her nephew cautioned against confronting them - “Don't you know they could put a hoof right through you?" A wise warning, because not all deer who come to your house are merely pranksters, as a man in Ithaca, New York, learned.

Deer are a common sight on Tom Hartshorn's property, but he was clearly unaware of the risk they present: they'd often slept on his porch, and when his son was five, he was allowed to rub noses with a fawn.

So when he stepped outside and startled a buck that crashed through a window into his workshop, Hartshorn was unprepared for what followed.

"I went in thinking it would be like shooing a rabbit away," he said. "But the next thing I know, I am in the battle of my life."

Hartshorn entered and attempted to steer the eighty pound animal towards the door with a shovel, but it went after him. After a struggle managed to whack the deer on the head, and the blow was apparently fatal.

Frighteningly, this sort of incident is not as rare as you might think. A local expert says that he's called a couple of times a year about deer in buildings on the Cornell campus. He advises that you treat this situation like any other dangerous intruder: Call the police.

Hartshorn will no doubt take that advice next time. He never meant to commit Bambicide, he said, but he had no choice: "I was just defending myself. It was either me or the deer."


Your pets are not safe either - thanks for the warning to Flickr user CGP Grey.

Email ThisBlogThis!Share to TwitterShare to FacebookShare to Pinterest
Labels: deer