Biting the hand that rescues you 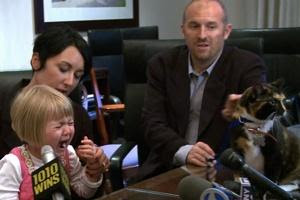 Perhaps appropriately for the week that THE BOOK is coming out (tomorrow!), there's so much bad animal news, it's hard to decide what to cover in detail. Just a few examples:

-The Ig Nobel prize that was awarded last week to research showing that a certain type of Australian beetle is happy to have sex with discarded beer bottles instead of female beetles - but only the brown bottles with little bumps on them.

-The coyotes that took over an abandoned house in Southern California.

-The news that escaped pets may be teaching wild parrots to talk, which, although derided by some skeptics, could have frightening implications if true.

But all of these take a back seat to what is clearly most significant recent news for the purposes of this blog. It's an update on one of those heartwarming animal stories that went viral - but that turns out to have a dark side.

By now everyone has heard the tale of Willow, the cat found in Manhattan that turned out to have disappeared five years ago from a home in Colorado. Willow's history was discovered when she was picked up on the street and brought to an animal shelter, where they scanned a microchip that revealed her true identity.

The story was covered in major media outlets across the country, with much wonderment over how a cat could have made the trip of many thousands of miles. There was rather less coverage of the prosaic explanation, that someone on a ski vacation had found the lost cat, assumed she was a stray, and flew her back to his Brooklyn home.

The family was reunited with Willow last week, when they flew to New York to pick up the prodigal pussy and, of course, make the rounds of media outlets. All very charming, till one news conference when Willow decided to make her real feelings known, as reported by the New York Post:

Spotlight-weary Willow the cat bit her 3-year-old owner yesterday as cameras rolled on their happy if painful reunion.

Little Lauren “Lola’’ Squires had barely finished cooing about how she couldn’t wait to get long-lost Willow home to Colorado -- gushing, “I’ll feed her, play with her, take good care of her” -- when the frustrated feline snipped at her hand.

Willow's owners downplayed the bite, saying that the cat was just "stressed out" by all the attention. They're sure she'll fit in when she gets home, where she will meet a strange dog they acquired after she left along with the strange child. Why so confident? They explained, “she’s very dominant . . . we used to say she acted more like a dog.”

We suspect we haven't heard the end of this story.