Putting ideas in their heads 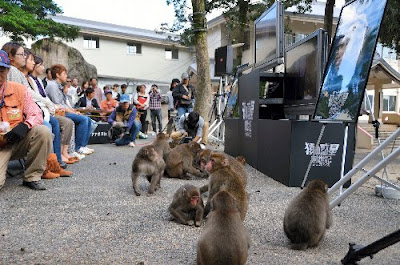 If you've been paying attention, you'll know that this blog isn't just about animals that behave badly. It's often about humans who enable their bad behavior. And it doesn't get any worse than this story out of Japan.

What you see in the photo above is a movie screening held at Mt. Takasaki Natural Park in Kanzaki, Oita. (I'm being specific about this so you know exactly where it isn't safe to go if you visit this otherwise lovely, if cute-animal-obsessed, country.) For this event, a special condensed 13-minute version of the film was prepared, no doubt to account for the monkeys' short attention spans. The monkeys were served with special-occasion treats of grapes and bananas, and about 200 people and 400 macaques attended.

These efforts seem merely absurd until you find out exactly what these macaques were watching: It was the new Planet of the Apes movie. You know -- the prequel to the series, the one that shows how the monkeys take over the Earth.

You may poo-poo the notion that this movie will put ideas in these monkeys' heads. Macaques can't learn anything from movies, right? Not so fast. It's been shown, for example, that macaques can learn which are the high-status, dominant monkeys by watching films of them.

And don't forget that these filmgoers aren't just any monkeys. These are are the same macaques that have been known to terrorize and attack innocent civilians, hiding behind their reputation as the adorable "snow monkeys" that take Japanese hot-spring baths and play with snowballs.

You'd think Japan had had enough problems lately, why are they asking for trouble? Or could it be that they're so tired, they're ready to give up and let the monkeys take charge?

Thanks for the tip and translation from the Asahi Shimbun to the Kyoto bureau of Animals Behaving Badly.