Not all our fault 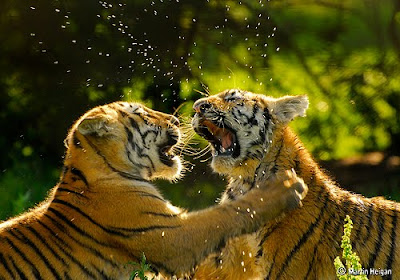 Animal lovers feel guilty for the terrible things humans are doing to the planet that are driving other species to the brink of extinction. And while this blog is not necessarily in favor of paving wildlife habitat, spewing pollutants into the atmosphere, dumping trash into the ocean, spilling chemicals in waterways... still, it's only fair to note that some animals really aren't helping.

But not all animals are so passive about their slide into nonexistence. Tigers seem to be taking a more active role. Last month at a zoo in Texas, a female Malayan tiger killed her mate. The Malayan tiger is critically endangered, with only an estimated 500 left in the wild, and these two individuals had been brought together at the zoo especially for breeding purposes.

But for at least one of these animals, perpetuating the species apparently took a back seat to relationship problems. Zoo officials were quoted after the attack saying "we never saw this coming." But in fact it came, as Reuters put it, after "months of simmering jealousy in a feline love triangle."

The zoo had two female tigers, who were kept apart because they didn't get along - but took turns keeping company with the male. It seems that this system worked no better than it would with most human relationships, with one staff member quoted as saying "The girls are jealous of each other." Yet apparently it was assumed that neither of the ladies would place any blame on the male for enjoying the other female's company. This vision of tiger open-relationship harmony was proven a delusion when finally, one of them just couldn't take it anymore.

And this wasn't the only recent example of a rare tiger reducing the population of its species by one. At a conservation reserve in South Africa, a male South China tiger broke into the enclosure of a younger male, who killed the intruder. The South China species may be extinct in the wild, and there are only a few dozen in captivity. The reserve is run by a group called Save China's Tigers which is breeding the animals and trying to train them to survive in the wild for reintroduction to their native habitat.

Way to help them save you, tigers. I think I'll be donating my conservation dollars to some nice frogs instead.