Bears will stop at nothing 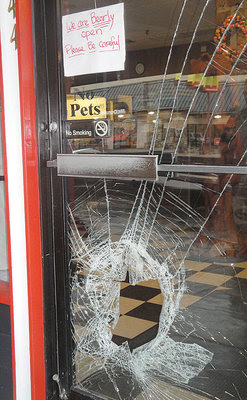 This blog has been following the misdeeds of bears since at least 2009 when a bear mugged a New Jersey man in his driveway for his Italian sandwich. We've seen bears breaking into cars, a bear in a hot tub, and one stealing from a back porch freezer, to name a few.

But recently the trend has been ominous: Bears have been boldly strolling right into our homes and businesses. Earlier this month, we saw bears that broke into a pizza place and robbed a home of a birthday cake. And then, if you are a fan of the blog's Facebook page, you saw video of a bear climbing around in the vegetable department in a grocery store. (And if you're not a fan of the blog on Facebook, why not?)

Now, the bear invasion may be threatening one of our most precious national traditions. Hide your Halloween supplies or you may be next: a bear broke into a candy shop in Tennessee. When two employees arrived for work in the morning, they found a scene of devastation:

Candy, wrappers and packaging were strewn throughout the back storeroom. Rock candy was broken in tiny pieces all over the floor and nuts were scattered everywhere. Pecan logs — $15.95 a pound — had been chewed on and hunks were missing out of $3 caramel apples. A whole container of white-chocolate-covered pretzels was demolished, including the plastic packaging they were housed in.

The storeroom's cement floor was still wet and covered in paw prints, from the bear's walk through the morning showers.

Upon further inspection, after rounding one of the candy-making counters, the women noticed a hole in glass of the front door. The bear had also relieved itself in front of the shop's glass display cases.

The pair assumed the bear was gone, but ran out to the safety of their cars to phone their supervisor anyway. Good thinking, because when he arrived, he came face to face with the bear in a storeroom. Fortunately no one was injured, but $500 worth of sweets were lost, and the front door of the shop will need to be replaced.

Don't think you're safe because you're not in the Tennesee mountains. Bears are heading for places where people aren't used to them, like the suburbs of Atlanta - so far those bears have been satisfied with trash and bird feeders, but how long do you think that will last?

And you can't even expect the authorities to be on your side. They'll advise you not to leave food where bears can get at it, and then, like in Albuquerque, they go and take in a skinny bear, feed it up, and release it.

That bear knew what side his bread was buttered on. When Fish and Game officials brought him up into the mountains and opened the door to freedom, one said, "He wasn’t eager to go... he didn’t want to come out of the trap for some reason."

"For some reason." Yeah, now he'll have to break into houses on his own, instead of being served. But they've made sure he'll do a good job of it: "He is now a nearly 200 pound bear," said a staff member at the wildlife rehab center where the bear had been a guest. "And a very feisty bear, aggressive bear. He should do well."