The dark truth behind another charming fable 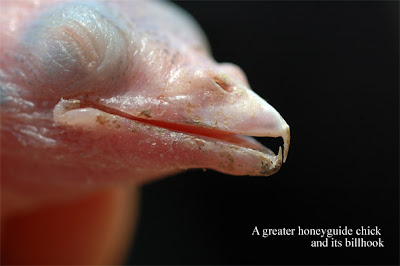 It's a recurring theme of this blog that the better the reputation an animal has, the worse the real truth. It's also a recurring theme that scientists and naturalists are among the worst when it comes to making excuses for bad animals.

But it's only fair to say that it's also scientists who often do the work of digging up those dirty truths, and today we've got one of those stories.

The greater honeyguide is a bird that gets its name from its allegedly helpful behavior guiding humans and honey badgers to beehives where they can get honey. No less an authority than science writer Ed Yong of Not Exactly Rocket Science was fooled into repeating this story recently. No fault of his, since as he points out, it appears in a number of respectable sources.

But as he then discovered, it's all lies. For at least two decades ornithologists have been trying to debunk this fable to no avail. A paper published in 1990 points out that over two centuries of research in Africa, "no biologist or naturalist, amateur or professional, has observed a Greater Honeyguide leading a Honey Badger to a beehive."

But the truth is no match for our desire to believe this stuff - especially when someone even faked a video of the legendary behavior using a stuffed bird and a tame badger.

And it turns out that it's not just that the helpful nature of honeyguides a lie. They've also got a murderous secret.

The honeyguide is a brood parasite - that's a bird that lays its eggs in other birds' nests and lets those poor saps do all the work of raising their young while they go off and party. You probably know that a more familiar bird, the cuckoo, does the same thing. But you might not be aware that the baby cuckoo doesn't just settle down and join the family: they push the other babies and eggs out of the nest so they get all the foster parents' efforts for themselves.

The honeyguide has a similar charming attitude towards its foster siblings, but a bloodier way to achieve the same end: it's got a hooked beak to murder them with, which you can see in the photo above. According to the authors of the recent paper that prompted all this honeyguide discussion:

Despite being blind and in total darkness, honeyguides attacked host young with sustained biting, grasping and shaking motions. Attack time of 1–5 min was sufficient to cause host death.

You can see the researcher's actual video of this behavior in Ed Yong's post about the paper. I haven't watched it myself. He says the video is "not pleasant, watch at your own risk." And having lately seen what this man can endure on his new blog Nature Wants to Eat You, if he says that about a video, I think I'll pass.