Turkey Revenge in the Big City 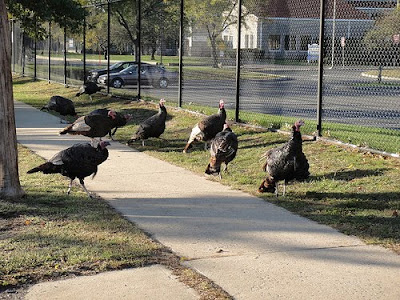 This blog has been covering the turkey menace since the beginning, most recently with actual video of an attack on a mail truck.

Don't fool yourself that you're safe because your Thanksgiving dinner takes place in an urban area. Follow the links in that first post and you'll see that as far back as 2007 turkeys were harrassing pedestrians on the main shopping street in Brookline, MA, just over the border from Boston. We've also seen them in Philadelphia. And if that doesn't convince you, how about New York City?

OK, so it's just Staten Island (says the kid from the Bronx) but that IS legally New York City. And it's only a ferry ride or strut across the bridge before the hipsters of Brooklyn and soon after, the bankers of Wall Street could be in their sights.

And remember, these are New York turkeys now. They don't mess around, as a couple of quotes from the Daily News reveal:

"The filthy animals are like a gang. They take over the street and yards and poop everywhere. It's disgusting."

"I one time saw a man at the red light taunting a turkey. His window was down and he was making noises at it. Next thing you know the light turned green and the turkey started chasing the car down the street, pecking at it."

Although this situation is getting a lot of coverage this year, it's not new. Local government has been trying without success to deal with the situation since at least 2007. Back then, one local commented:

"People with young children are afraid because the turkeys are very, very brazen. They’ll chase after dogs. They will sometimes get aggressive with people. And if you’re walking under the trees, it’s just like any bird: Plop!”

But ineffectual attempts at control have combined as usual with humans not knowing which side they are on. When one man frustrated by government inaction took the situation into his own hands, he was convicted of attempted animal cruelty for firing a barrage of bottle rockets at the turkeys.

So numbers have continued to grow, and the birds have only grown bolder. Another victim told the Daily News:

"It was straight out of 'Cujo,'" said dental assistant Gina Guaragno, 23. "I'm sitting in my car Facebooking on my phone when turkeys jumped on my windshield.

"I screamed like I was being murdered. They just kept looking at me like it was their car. I felt trapped. I was so scared."

The only small comfort we can take is that these may be New York turkeys, but they're up against New York humans: says one local,

"I've seen people grab them and put them in their cars always around Thanksgiving time. They are turkeys. It's Thanksgiving. They should look out or they will become someone's dinner."

Up close with a Staten Island turkey gang by brave Flickr user dazedeffect.

Email ThisBlogThis!Share to TwitterShare to FacebookShare to Pinterest
Labels: turkey