Animals don't appreciate what they've got 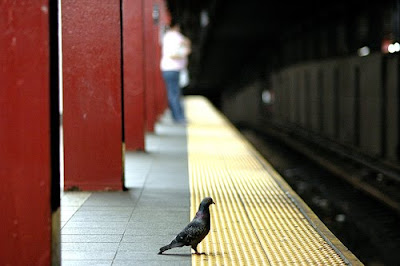 Haven't you always thought it would be amazing if you could fly? I don't mean in a big clunky metal tube powered by fossil fuel. I mean, like a bird - just spread your wings and go whereever you want. No traffic jams, a terrific view, fresh air. We've all dreamed about it, right?

Well, not all birds appreciate how lucky they are. In Sweden, a bunch of pigeons have decided that they'd rather take public transportation:

"They stand calmly at the platform and wait for the subway train to arrive. When it does they get on, travel one stop, jump off and then head for their favourite haunts," Rasmus Sandsten, press spokeperson for underground operator MTR, told The Local.

The pigeons are believed to live somewhere near Farsta Strand, in south Stockholm, and travel daily one stop to nearby shopping centre Farsta Centrum where there are many cafés and plenty of food to be found.

According to Sandsten, the most likely explanation is that one pigeon first got stuck on the metro by accident.

"Then, when it saw where it ended up it thought; 'this was a great idea'. Sooner or later more of them followed suit," Sandsten said.

After foraging in the trash at the shopping center, apparently most return home in a more conventional manner, since pigeons are rarely seen travelling in the opposite direction. Maybe they want to work off the calories, but I suspect they're just not smart enough to figure out how to make the return trip.

Despite the bad reputation pigeons have in some quarters, the transit agency has received no complaints. The birds are wisely keeping a low profile: "They behave well while on board and don't seem to be making much of a mess. They also choose to travel later in the day, cleverly avoiding rush hour."

However, although this story is being picked up as weird news all over the place, it's not a recent development, even in Sweden. The transit spokesman went on to explain that conductors first reported a gang of pigeons using the trains in the 1990s. "And since then the birds have been spotted getting on the subway at stations all over Stockholm," he said.

And in fact, lazy pigeons are a worldwide phenomenon in cities with subways. That photo up there was taken in the New York subway by LarimdaME on Flickr, where you can also find photographic evidence of pigeons on the Boston T, London tube, in the subway in Toronto, waiting for the Paris Metro, BART... And it goes without saying, of course, that none of them pay the fare.

So, as is often true, this bad animal news isn't news at all. It's just another of many cases where these animals are flying under our radar - or if they're too lazy for that, taking the subway under it.