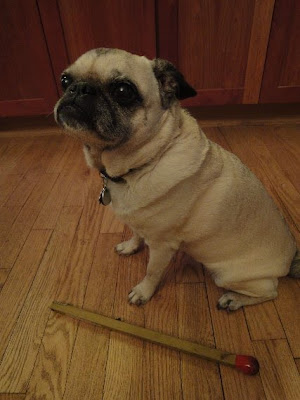 In any given week's news you'll find a number of stories of dogs credited with saving lives by alerting their owners to a fire. Recent examples come from Michigan, Ohio, Pittsburgh... I could easily go on.

What these stories never seem to mention is that - as we've noted before - pets also CAUSE hundreds of fires every year.

For example, here on the blog we've seen a retriever that turned on a stove and set fire to a house in England, and if you've read the book, you know about the cat that committed arson by stepping on the switch of the toaster oven.

It's not just household pets, of course: In one recent case, pigs started a fire in a barn at a farm sanctuary in upstate New York, sending four employees to the hospital for smoke inhalation suffered while rescuing the animals.

But for most of us, it's cats and dogs we need to worry about. And worry we should, as one family in England discovered. It's suspected that their kittens turned on the stove by walking over a touch-sensitive control. The blaze spread to the house next door as well, and damage is so extensive that the buildings may have to be torn down.

And dogs have no concern for the consequences when they're determined to fill their bellies: elsewhere in England, a dog set fire to a home when it turned on a burner while trying to a get a pizza that was left on top of the stove.

So next time you read one of those stories of animals heroically saving their humans from a house fire, ask yourself: Maybe, just maybe, there's a good reason that they knew about the fire before everyone else?