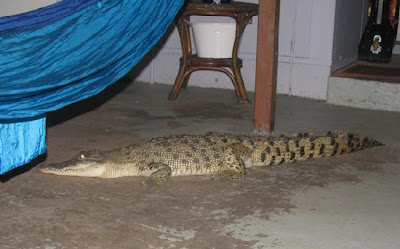 A few updates in some of our traditional categories of bad animal behavior:

-Animals bringing out the worst in people: A study reveals that the average dog causes three family arguments per week, over 2000 in the course of its life:

Incredibly, in 17 per cent of households the dog disputes have got so bad one member of the family has slept in the spare room, while a quarter of those polled have been known to storm off after things got too heated.

-Animals with human vices: A parrot rescued by sanctuary in England has been barred from appearing in education programs because of his fowl - er, foul mouth. A staff member puts it delicately: "Mr T is actually a very friendly parrot but he has never lived with other parrots and he has picked up some interesting phrases and words which are not appropriate for some venues we go to."

-Endangered animals that can't blame us: A rare Sumatran tiger at the Toronto Zoo, brought all the way from San Diego for breeding purposes, killed a female instead of mating with her. The zoo spokesperson who commented that tigers "rarely kill each other" obviously doesn't read this blog.

-And finally, in the recent trend of animal home invastions, the perps are getting scarier: A family in Australia heard its dog barking and woke to find a 1.7 meter crocodile in their home. The resourceful man of the house fended it off with a guitar till wildlife officials came to subdue the creature. Identifying marks revealed that ths reptile had been on the lam since a breakout at a croc farm over six years ago.