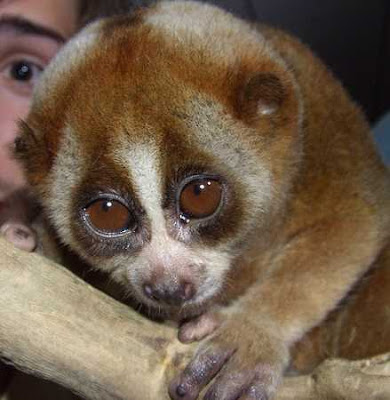 That's the headline from New Scientist, reporting on a study published in the International Journal of Primatology.

I could just let that headline and adorable photo stand for itself. But no, it's my job, so I'm going to rub it in. Humans love to believe that our primate relatives are basically nicer people than we are, but this is the sort of thing we always find when we look more closely. And don't think these guys are just stumbling upon roadkill and figuring what the hell, it's already dead. It's quite deliberate and calculated:

In 2007 Hardus was tracking two orangs in the canopy above her – a female called Yet and her infant Yeni – when Yet abruptly changed direction and approached a slow loris (Nycticebus coucang). She knocked it out of the tree, crashed down to the ground, bit the stunned loris's head, then carried the body back into the tree to eat it. When Yeni begged, she was allowed to share the meat. The great apes each chomped on opposite ends of the dead primate, sharing it between them like lovers might a strand of spaghetti.

The researcher also found that in all documented cases the orang stunned the loris before proceeding. This is a precaution that shows some forethought, since slow lorises have another highly unusual quality aside from their extreme cuteness: they have toxic saliva, so you don't want to get bitten before you take a bite.

Oh, and if you don't believe it? Click on the link. She got video. In these days of cameras everywhere, even apes can't hide their bad behavior for long.