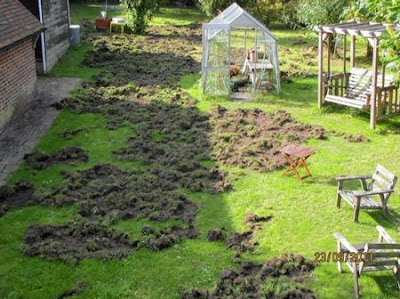 Wild boars are one of the recurring culprits in our bad animal tales. In the book and many previous posts we've seen them plaguing Germany. They're also a problem in the US, in locations as far apart as Texas and New York State

And the reports continue. They're tearing up yards in a fancy neighborhood in Vienna and an English town in Kent, pictured above. Recently, what was called a "reign of terror" ended when a huge boar in Florida was shot when he attacked trappers attempting to capture him. The porker had been running amuck for over a year, and two cars that hit him were totaled while the pig escaped without apparent harm. A tractor had to be called in to move the body, which was described as "as big as a Volkswagen."

These animals have no respect for what we consider sacred: now they're tearing up the grounds of Vicksburg National Military Park in Mississippi, where thousands of Civil War soldiers fought and died in 1863. "It looks like the world's biggest Rototiller has gone through some areas," says the park superintendent.

The destructive swine can be legally shot year-round in the state - "It's an all-out war on them," said a Department of Wildlife spokesman. But he has no illusions about who is going to win this modern battle of Vicksburg: "But hunting will never get rid of them. They can breed three times a year and a sow can have eight to 10 pigs each time. You do the math."

Email ThisBlogThis!Share to TwitterShare to FacebookShare to Pinterest
Labels: boar