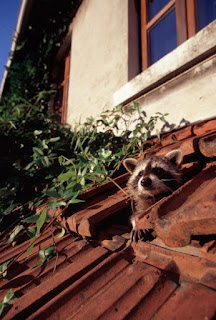 
An underage mountain lion has been caught after trying to slip into a casino in downtown Reno, Nev., ahead of the breakfast rush.
Nevada Department of Wildlife spokesman Chris Healy says the young male cat’s behavior was “almost the equivalent of being a stupid teenager.”


He whole-heartedly embraced life as a carefree bachelor – despite the best efforts of his keepers. Even for his notoriously choosy species, Bao Bao proved difficult to please sexually, though he had plenty of offers. He was after all one of the zoo's star animals.

He spent two years in London from 1991 to 1993, where zookeepers vainly tried to persuade him to mate with a female called Ming Ming.

During another Chinese state visit to Berlin, this time by Li Peng in 1994, another panda was promised to the city’s zoo and a year later Yan Yan arrived to try to tempt Bao Bao.

All attempts to persuade them to mate proved unsuccessful and the cruelly rejected female died in 2007 aged 22.


One raccoon sauntered into a police station in the eastern German city of Dresden. Another found the front of the Federal Administrative Court building in Leipzig to be a comfortable place to sleep.

In cities such as Dresden and Bielefeld, the animals have started banding together to harvest entire cherry or plum trees.


And finally, one brave man fights back:


A Nepali farmer who was bitten by a cobra in his rice paddy field has killed the snake by repeatedly biting it in return.