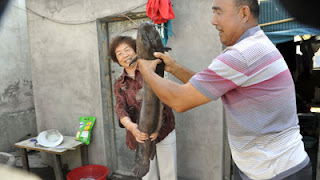 Sometimes I think it's high time to shut down this blog. How many more times can we read about bears breaking into food shops, animals with drinking problems, deceptively cute creatures who commit vicious attacks?

But then a story like this comes along and I decide it's worth carrying on after all:


A Chinese couple claim their home was ransacked by a fishy intruder - a giant catfish.

Xu Xianmin and his wife claim the fish sneaked into their home, in Changji, Xinjiang Province, when their backs were turned.

They thought their one-room home was empty when they locked up to leave for their jobs as sanitation workers at 4am.

But when they came back at 9.30am, it had been trashed. They thought they had been burgled until they saw something moving on the floor.

"I thought my home had been ransacked by thieves. The table was turned over, and stacked plastic bottles were everywhere," said Xu.

"When I was picking up things from the other side of the table, I suddenly touched something cold and slippery, and it was moving!"

After asking neighbours for help, they found a huge catfish on the floor.

A baffled Xu added: "No thieves would leave a giant fish in the house while stealing nothing. And it's not possible that someone threw the fish in through the window, as the door and windows were locked.

"All we can imagine is that the catfish somehow sneaked into the house in the time between us opening the door and then leaving for work."

To add to the mystery, the couple's home lies in a residential area with no river or pond nearby.

A local aquatic expert said the catfish was at least three years old and would be able to survive out of water for a relatively long time.