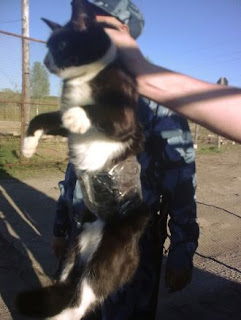 
Prison guards in Russia's northern Republic of Komi have caught a cat with banned objects, namely cell phones and chargers, attached to its body.

"Two packages were taped to the animal's back. When the packages were unwrapped, guards found objects prohibited in the penitentiary facility — two cell phones with batteries and chargers," the Republic of Komi penitentiary service department said in a statement posted on its website.

The fate of the cat is unknown.

Though this is the first such incident in the Komi prison, cats are sometimes used by Russian inmates to deliver drugs.

-Stories about animals making suicide attacks that cause power failures are so common I don't usually bother to report them, but this one has a comment worth noting:


Power was interrupted for 2,774 customers on the east side of Casper and part of Evansville at 3:18 a.m., said Margaret Ohler, spokeswoman for Rocky Mountain Power.

"It's really hard to get animals to attend our safety demonstration," Ohler said.


A nest of ants terrified a 75-year-old woman in the German town of Offenburg who called the police at 3am after her doorbell repeatedly rang. Officers discovered the culprit was a nest of ants who had built a home of such size it pressed elements together to work the switch.

-Finally, courtesy of the blog's Scandinavia correspondent, a story of a man who was held hostage by wild sheep.   The Google translate version is good enough for me - I'm not sure I want a clearer picture of the terrifying details.