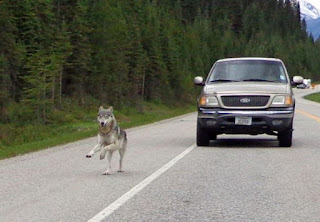 New frontiers in toilet rodents: Last time we saw people celebrating bad squirrels. The post before that we saw a rat in a toilet reach new heights by returning repeatedly for nine months. I can only presume that these stories combined to inspire this squirrel in a toilet in Winnepeg, which was promptly rewarded with the celebrity of its own Twitter account.

New frontiers in canines chasing vehicles: Dogs chasing cars are a long-standing tradition, but as far as I know the photo above is the first recorded case of a wolf chasing a motorcycle.

And finally, some things never change: Cats that roam the neighborhood stealing things and bringing them home are so common I can hardly be bothered to link them. (Oh fine, here's one; if you want a bunch more you should really read the book). Here's another, with the usual jokes from the humans affected:


“One day, Theo brought home a gardening glove and then the next day he brought home the other one, so we now have a pair. We have no idea where he got those from and as yet, no-one has claimed the glove puppet.

“We have been able to reunite some of the items with their owners and thankfully, most people who know Theo are very understanding and think it is funny.”

According to Mr Edwards, the feline fraudster has a particular penchant for feathers, rubber and tinsel. He added: “He is quite a menace, even when he’s at home. Last Christmas, he completely stripped the house of tinsel when we were out one day and left it in a heap on the kitchen floor.”

“He has become a bit of a neighbourhood celebrity for all the wrong reasons. We live in hope that one day he might bring back something useful.”