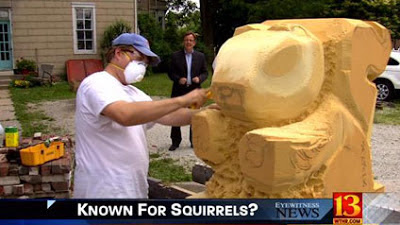 On this blog, we often bemoan people who are enablers of bad animals. But here we've got an appalling story of people who are actually honoring them with commemorative statues.  Sometimes, I just don't know what to say.


It is not unusual for a city or county to build statues to important people or events commemorating its past, but Hamilton County may be on the verge of a first.

They're constructing statues of squirrels. It might seem a little random, but the statues mark an event in Indiana history.

"Have you ever heard of the great squirrel stampede?" we asked on passerby, who responded with a definitive "no."

We asked other folks on the streets in Hamilton County if they were familiar with Indiana's Squirrel Stampede.

Dave Heighway knows all about it.

"There is one paragraph that talks about a great squirrel migration in 1822," he said.

As the Hamilton County historian, he's been educating all who would listen about the 1822 and 1845 stampedes where migratory squirrels destroyed cornfields as they trekked across Indiana.

"I read that. I thought that's crazy. I actually thought, that's nuts," he said.

He told the Hamilton County Leadership Academy and members secured a grant to start work on a mockup for a fiberglass squirrel. In fact, the group would like to see a half dozen of these in all eight Hamilton County communities.

So why not? Just the thing for the county that has everything. A statue remembering a squirrley part of its history.

"People usually build monuments of, someone famous or something famous. Not usually a squirrel," she said.

Livvie Southerland from Sheridan chimed in. "It would be random. I would get a picture taken with it."

Even county historian David Heighway admits it's a little squirrely.

"It's kind of strange. More like a zombie apocalypse. Everyone talks about now. It's a squirrel apocalypse," he joked.

The fiberglass statues are expected to cost anywhere from $500 to $1,000 each to produce.