Animals where they shouldn't be, automotive edition 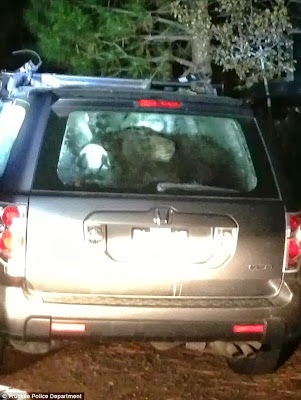 From near Lake Tahoe comes this excellent headline:


Truckee Police See Rise in Bears Getting Stuck in Cars

In the last two weeks, police say three bears have become trapped in cars in Truckee.

What is excellent is the clear implication that bears get stuck in cars there regularly enough that you have to have three in quick succession for it to be remarkable. This of course should be no surprise to readers of this blog, who've seen this sort of thing before.  As the article warns, "Experts say bears know how to open unlocked car doors," but don't be impressed by how smart they are, because the also regularly manage to lock themselves in and can't figure out how to get out -  and they tend to react by trashing the vehicle in frustration.

Still, that is an easy problem to solve compared to the next one. All you have to do is lock your car door, and at least if a bear does get into your car, it will be obvious. Not like this:

Toyota is recalling 870,000 vehicles because a problem with an air conditioner part could cause airbags to deploy unnecessarily .

In some cases, the problem was caused by spiders.

Sometimes, their webs can create a blockage in a drainage tube coming from the air conditioning condenser. That can cause water to drip down onto an airbag control module, causing a short circuit. That, in turn, could cause the airbag warning light to light up on the dashboard and it could even cause the driver's side airbag to deploy, something that happens with explosive force.

And before you comfort yourself with how rare this sort of problem must be, let me remind you that in 2011, Mazda recalled 65,000 cars because of spiders nesting in the fuel system.

You know what? Maybe you should just take the bus.