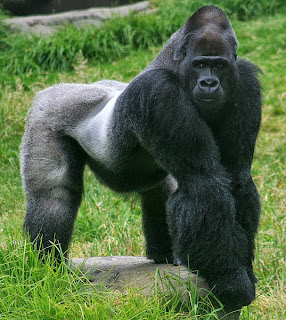 In Sweden, a woman was sent to the hospital when a gorilla with very good aim threw a rock at her:


The woman, 38, was hit in the forehead by the stone, which was thrown by one of the five gorillas at the Kolmården National Park in central Sweden. The stone measured roughly five centimetres in diameter, said Marjorie Castro, head of the zoo.

"At first everything seemed fine. She was bleeding a little from her forehead, but seemed to be in good health," Castro told the Aftonbladet paper. "But she was hit in the head and gorillas have enormous strength, so we called an ambulance. After a while, she felt weak and we had to lie her down."

The zoo made rather lame excuses for not forseeing the problem (my italics):


Castro added that the gorillas have never thrown things at visitors before, with the exception of lighter objects like grass.

Right, so what were the odds these powerful and intelligent apes were going to eventually try something else? And in fact, other visitors said it had happened before:


However, following the news of the stone-throwing gorilla, other Swedes shared similar stories about their experiences with the Kolmården primates. The mother of a 7-year-old boy told Aftonbladet that Enzo the gorilla had thrown a stone at her son in July last year.

"I got so scared and was thinking 'Please, don't throw rocks," the boy told the paper. "They are scary."


I mean seriously, look at the arm muscles on that gorilla from Wikipedia, what were they thinking?