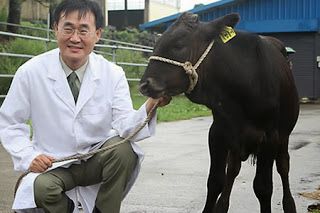 In Korea, this is how a cow thanks the person who gave it life:


A cloned cow attacked its “creator” last week just ahead of the Chuseok holiday, inflicting injuries on the world-renowned embryologist, who will need eight weeks of medical treatment.

Prof. Park Se-pill at Jeju National University had five of his ribs broken and injured his spine in the Sept. 15 attack, the university on the scenic resort island said Sunday.

“Park was video-recording a black cow, which he cloned from species indigenous to Jeju four years ago, and all of a sudden, it charged and attacked him for 15 minutes,” a school official said.

“The 800-kilogram black cow is very strong because its cell donor was the best available. Park could not escape easily because he wore a special suit and long boots. He is now being treated at the university hospital.”

“We didn’t have the cow neutered because we have to check its virility. Hence, it often gets very restless,” Park said.

The 54-year-old said that the cow is now in a barn and no special measure will be taken despite the incident.