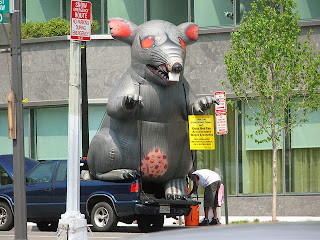 Brilliant headlines, I meant, but now that I think of it, these are some pretty brilliantly creative and successful bad animals too - not that that's a good thing:


Ricky Strong had four monkeys pounce on him, and one of them nearly bit off his thumb.

“I had to hit ‘em and fight them off me and I went to run and get away and I actually face planted into that tree. And then I ran out of here bleeding running all the way down here and two of them come chase me running me all the way to my house.”

The monkeys got loose midday Thursday from a Wedgewood shed.

Strong’s hand is now in a cast, his shirt has claw marks in it, and his jeans are stained with his own blood.

And this all started because he gave one of the escaped monkeys an egg sandwich.

“He actually came to me and walked up my arm,” Strong explained.

Strong walked with the monkey back to the shed where the other three primates were.

Strong was about to leave and then a cat showed up.

“And when it did, the one monkey threw like a toolbox at the cat,” says Strong.
Then a dog got on a deck and started barking and all four of the monkeys jumped on Strong.


With needle-sharp quills, some longer than the average human forearm, porcupines sport one of nature’s most frightening defenses against predators. But a new study shows they can be fearsome killers as well. Researchers in Italy have found that the rodents can slay dogs, foxes, and even badgers. Scientists monitored porcupines in Tuscany for about 18 months... In one such case, two porcupines ran backwards, forcing a dog into their den, where they fatally impaled it with their quills. Other porcupines killed four other predators, two badgers and two foxes, over the study period; such deaths have never been previously recorded in scientific literature.


The British government is reportedly spending the equivalent of more than $11,000 a month fighting mutant rats that have infested Parliament.

According to the Daily Star, pest control experts at the House of Commons spent £7,000 (about $11,216) dealing with poison-resistant -- ergo, "mutant" -- rodents in a single month. That bill represents an increase of 15 percent from two years go.

That's not all. The rats are apparently spreading across the UK. International Business Times reports that the mutants look like normal rats, but eat poison pellets intended to kill them "like feed."

"Normal rats are being killed off by poison, so these resistant species are taking their place. It's only natural that their numbers are expanding," British Pest Control Association spokesman Richard Moseley told the Metro. Ain't evolution a rat bastard?