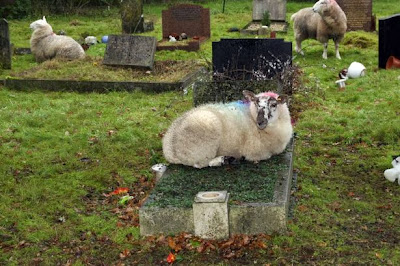 There are a ton of bad animal stories I need to catch up with. But when you get a story about animals desecrating a cemetery, it's just got to stand alone. From The Telegraph:


As a way to save money at a village churchyard, it had seemed like a splendid idea.

But a scheme to let loose a flock of sheep in a graveyard to keep the grass down has backfired, after they grazed on floral tributes and mementoes left for loved ones.

The ten ewes were introduced to Holy Trinity Church in the aptly-named village of Grazeley, Berkshire, because the parochial council said it could no longer afford anyone to mow the lawn.

But Nicola Millard, whose grandparents are buried there, said: “The condition is awful - basically they’ve ruined all the flowers and bent forward one of the headstones, and there is a lot of debris over the graves.”

Vic Jerrom, who has several generations of ancestors buried there, described the damage as 'very disrespectful' to those laid to rest.

"It's a mess, the sheep are grazing on the graves and of course there is sheep droppings everywhere. It's despicable" he said.

And from the local media:


Vic Jerrom, secretary of Grazeley Village Hall committee, said he has had several people complaining about the sheep.

He said: “I have had two people saying they were absolutely in tears and one said she couldn’t get to her father’s grave to put a wreath of poppies on it."

Don't miss additional photos of the carnage at that link.