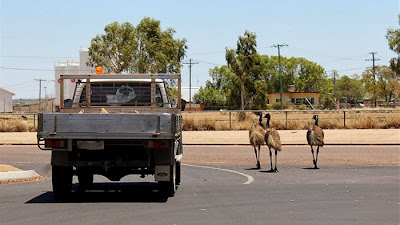 Today I had planned to write about deer in places they shouldn't be, for instance:

-The one in Indiana that smashed through a window into an elementary school and smashed out through another one ("This is the third one we've had," said a school official)
-The one in France that got stuck on a garage roof and had to be rescued
-The one that broke into a crab restaurant in Long Island and caused several thousand dollars worth of damage

But heck, we've seen all that before. What we haven't seen is this:


Emus are stopping traffic in the main street of Longreach in western Queensland as the drought forces them into town to look for food.

The emus have been walking residential streets in Longreach for some months but they are now in the main street, halting traffic and feeding in garden beds.

"They are taking absolutely no notice of the people, or the cars or dogs," he said. "When they are crossing the street, people have to stop for them. They just toddle across as they please."

And don't think this is the normal way of life in Australia - they haven't seen this before either:


Grazier and naturalist Angus Emmott says he has never seen them in the centre of town and it is quite a novelty.

"I think the locals are quite enjoying the scene of having them outside their shop fronts - that is something I haven't observed before," he said.

Don't miss the rest of the photos here.