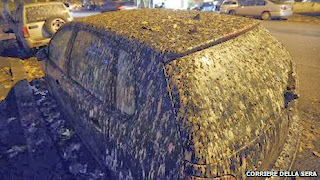 Some traditions have been going on for so long, it's hard come up with something original. You'd think that dogs eating homework and birds pooping on cars would be included. That makes these two stories all the more impressive.


Rome is facing a "guano alarm" as millions of starlings leave the city covered in a thick layer of droppings, Italian media report.

Some four million starlings annually overwinter in the capital, but this year spending cuts have derailed efforts to discourage the birds from settling in central areas. In previous years, anti-starling measures have included pruning plane trees and broadcasting amplified cries of birds of prey through loudspeakers.

The tree-lined Lungotevere, the boulevard running along the river Tiber, is particularly badly affected. Sections of it are thick with droppings, creating slip hazards for pedestrians, cyclists and motorbike riders alike.  Pedestrians arm themselves with umbrellas or run for cover. The situation is so bad that some residents bang on pots and pans in the streets and squares to scare the birds away, just as people used to do in years gone by.


It’s the oldest line in the classroom – “My dog ate my homework.” But in this case it was painfully true.
“I made a volcano project out of candy and I pinned the candy to a foam base,” Payton said. “I woke up one morning and I came down to my desk and it was just all over the floor.”

An X-ray showed fifty straight pins in the dog's stomach. They were removed by a vet. The homework was done over - this time, with glue.