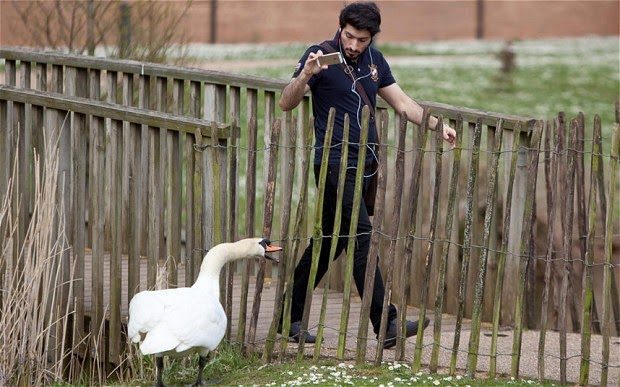 From England comes something that's new even to me: A racist bird.

At Warwick University they've had to erect a fence to protect people from an attacking swan - something that's not particularly unusual. But there's a novel wrinkle: this swan is said to only attack foreign students.


The animal – which is currently nesting – has been launching at people as they cross a footbridge over a pond at the university’s Gibbet Hill campus in Coventry, West Mids.
The footbridge is used by hundreds of students everyday wishing to get from their accommodation to their lessons at the university buildings.

But yesterday undergraduates revealed that the angry bird only seemed to be targeting students from ethnic minorities.

One 24-year-old student from India said: “These swans are very annoying, and the students feel as though they’re being bullied. I’m from India, and they attack me especially, they focus straight on me.

“We’ve been warned that the swans will be a bit feisty at this time of year, but they go for me all year round. I think they don’t like too many Indians in England – maybe the swans here are a little bit racist.”

Italian student Albertina Crocetti, 24, who is studying Physics with Business Studies, said: “It’s bizarre, she doesn’t seem to like foreigners and attacks them to defend her nest. She’s a true right winger that’s for sure – they certainly seem to be racially motivated incidents."