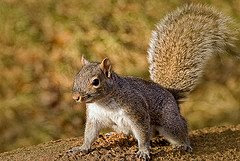 The news business has fallen on hard times. How can you doubt it when you can't find any followup to this story from 2007:

SKY NEWS UK Thursday July 12, 2007
Police in Iran are reported to have taken 14 squirrels into custody - because they are suspected of spying.

The rodents were found near the Iranian border allegedly equipped with eavesdropping devices.

The reports have come from the official Islamic Republic News Agency (IRNA).

The IRNA said that the squirrels were kitted out by foreign intelligence services - but they were captured two weeks ago by police officers.

Of course the Foreign office would deny it, but outside experts were also dubious about the accusations against the squirrels. When asked by NPR about the possibility of training squirrels to be spies, professor John Koprowski, co-author of North American Tree Squirrels, suggested that it would be difficult to "channel their elusiveness" into "constructive activity" in the field.

Still, clearly there were squirrels lurking suspiciously near the border - and their fate seems to be unknown. But that hasn't stopped other species from getting into the game, since Iran also arrested some spying pigeons near a nuclear facility in 2008.

Asked to comment on the pigeon story, one diplomat told Sky News, "It's clear there has been some sort of coo in Tehran."

Perhaps there's a bright side to all the sneaky bad behavior on the part of animals in the Middle East. With all the zoos downsizing due to the state of the economy, maybe some of those unemployed keepers can get work as prison staff in Iran.

Squirrel by, once again, the excellent Misterqueue.