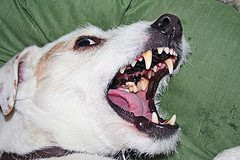 CLARKSBURG, W.Va. Associated Press – Cozmo the Jack Russell terrier has done what neither rain, sleet nor the gloom of night has been able to do — keep postal carriers in Clarksburg from their appointed rounds. Postal Service spokeswoman Cathy Yarosky said mail delivery to seven homes on Milford Street was halted because of the 20-pound terrier.

She said a carrier was injured after falling while trying to run away from Cozmo.

Cozmo's owners Jimmy and Justine Marino, said the dog has never bitten anyone. But they acknowledged he has gotten out of the yard a few times.

The Marinos have been told mail delivery won't resume until they get rid of the dog. Jimmy Marino said efforts to find a new home for Cozmo have been unsuccessful.

This blog may need two new categories: "Dogs and Traditional Sayings," for this one and the dog eat dog from last week; and lazy animals injuring people by no more effort than making them fall down: our own pets, this dog, and the nutria of our last post. Come on, at least get off your butt and bite people!