Extremely unclear on the concept 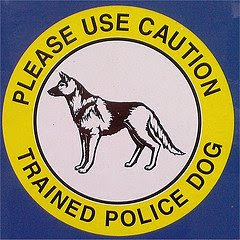 A police dog in England, adding insult to injury, attacked his handler instead of the guy who shot her in the leg:

Police dog handler Katie Johnson confronted gunman Wayne McDonald and his accomplice David Tyrell after receiving an emergency call over an armed robbery at a pub.

When McDonald blasted her in the leg with a shotgun, she set her dog Chaos on him, believing that he would save the day.

However, instead of jumping on the robber, Chaos bit WPC Johnson on the arm, allowing McDonald, 47, and Tyrell, 39 to flee the scene in Preston, Lancs.

I think I'd have had second thoughts about being assigned a trained attack dog called "Chaos," even before he showed how confused he was about his job. But the policewoman seems oddly unmoved:

WPC Johnson, who had only been paired with Chaos for three weeks when the incident happened, said: "I don't blame Chaos at all, dogs are dogs and not robots."