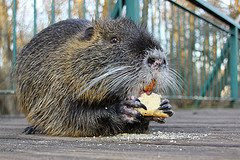 The nutria is a large, semi-aquatic South American rodent that has escaped from fur farms and established itself in much of the southern US.

You may feel safe from the nutria's huge naked rat tail and big orange buck teeth because you live in civilization, not wild wetlands. But not anymore. They're branching out, and the habitat where they're established may now include your local Wal-mart, according to the Associated Press:

NEW ORLEANS – A Louisiana woman is suing a Wal-Mart store over what she claims was a much-too-close encounter of the furry kind. Rebecca White says in her lawsuit that employees at a Wal-Mart in Abbeville let a rat-tailed rodent known as a nutria run loose and scare her. She says that not only did employees know it was in their store, but gave it a pet name, Norman, and failed to warn shoppers...

(Click here for the original story at the Abbeville Meridional.)

And don't bother moving out of the country to avoid them - that photo, of a nutria that demands a toll payment of food to cross the bridge, is from Flickr user gynti_46 in Germany.

Email ThisBlogThis!Share to TwitterShare to FacebookShare to Pinterest
Labels: rodents