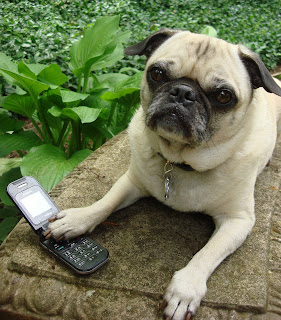 When they decided that 999 would be a good number to use for emergency calls, the British obviously didn't anticipate what a bad dog could do.


The Telegraph - A 999 operator worriedly returned a call from a suspected domestic violence victim only to discover that the caller was a dog that had stolen its owner's phone.

Officers traced the call, in which a man was heard screaming "Come out or else, I'm warning you", to Jodie Halfpenny's house in Withington, Herefordshire.

The operator, from West Mercia Police, immediately returned the call thinking that the caller might have been attacked after a muffled whine was heard before the line went dead.

But Miss Halfpenny, 20, answered and revealed that the call had been made by mistake – by her 14 month-old golden retriever Bailey.

Bailey had made the call inadvertently after making off with the phone and repeatedly biting down on the number 9 digit.

The muffled voices were Jodie and a male friend, who chased the dog behind their garden shed before wrestling the phone from Bailey's jaws at 4.30pm on Monday.

In this country you can go to jail for this sort of thing, but you know those bunny-hugging British - Bailey apparently got off without even a reprimand.

"After discussing the situation at length, we were satisfied the call was made by the dog and there was no danger."