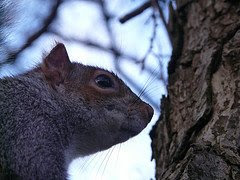 A cemetery in Michigan followed its usual tradition this year, of putting small flags in the graves of almost a thousand dead soldiers for Memorial Day.

But the next day, cemetery staff found that many of the flags were gone, ripped off leaving nothing but bare sticks behind.

The mystery was solved by the supervisor of the cemetry - obviously an observant fellow but not a reader of this blog, because he found it hard to believe that an innocent wild animal could be the culprit:

If he didn't see it happen, Ron Ceglarek said he probably wouldn't believe it.

A squirrel -- weighing about 3 pounds -- got up on its hind legs, tore a small American flag from a small staff next to a grave stone, rolled it up and carried it up a tree to a waiting mate building a nest.

It happened not just once, but about dozen times.

"He plucks them right off," Ceglarek, superintendent of Mount Hope Cemetery in Port Huron, said of a rogue squirrel that is stealing flags. "If I didn't see it, and I didn't follow the squirrel, I never would have believed it."

Email ThisBlogThis!Share to TwitterShare to FacebookShare to Pinterest
Labels: squirrels