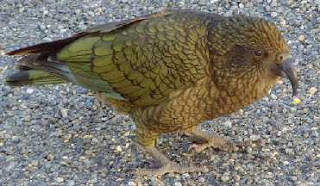 And gets away Scot-free...

SOUTHLAND TIMES, NZ - Te Anau police have identified a thief who brazenly stole a British man's passport, but will not pursue an arrest or attempt to recover the document.

A police spokeswoman said a Scottish man reported the theft of his passport from a bus heading into Milford Sound earlier this week.

The passport had been in a coloured courier bag that attracted the attention of a cheeky kea when the bus stopped at the Chasm on the Milford road.

While the driver was in a compartment beneath the bus, the kea grabbed the package. When the driver turned back, the startled kea flew off into the bush with the package. It has not been recovered and considering the size of Fiordland, is unlikely to be.

The Scottish man, who did not want to be identified, said he had been waiting for about a month for the passport to be returned from Wellington.

"Being Scottish, I've got a sense of humour so I did take it with humour but obviously there is one side of me still raging," he said.

"My passport is somewhere out there in Fiordland. The kea's probably using it for fraudulent claims or something."

The kea parrot is a well known troublemaker in New Zealand, although it is usually noted for its taste for delicacies like the rubber parts of tourists' cars rather than their passports, as you can see in this video.

Photo of the perpetrator by bus passenger Yvonne Richarson.