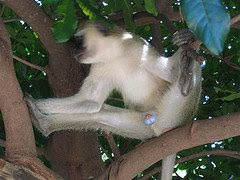 LUSAKA (AFP) — A monkey urinated on Zambian President Rupiah Banda as he spoke to reporters outside his State House offices on Wednesday.

"You have urinated on my jacket," a startled Banda told the monkey, one of many that makes their home in the trees outside his offices.

"I will give this monkey for lunch to Mr Sata," he joked, referring to opposition leader Michael Sata, who Banda defeated in last year's elections.

Banda is reported to have spent most of the news conference discussing the state of the economy - apparently monkeys are no happier about the global recession than the rest of us.