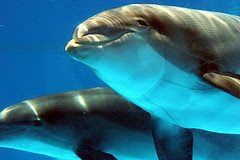 Dolphins. I've already tried to convince you that they are attention whores and gang rapists.

But you probably still think they are cute, and mystical, and noble, and live surrounded by love and new-agey instrumental music. Would it change your mind to know that that 'dolphin safe' tuna results in the death of ten times more sea turtles than other methods of fishing? No? OK, how about infanticide? Dolphins not only kill the young of another species, the harbor porpoise, but their own:

The attacks on dolphins less than a year old have spawned numerous theories. "Probably my favorite is male infanticide," notes (researcher) Paul Thompson from Aberdeen. If a new suitor approaches a female that already has a youngster, "there's no point in hanging around for two years with the wrong male's calf," he says. Killing the calf might bring the female into a receptive state much sooner.

Dolphins are all smiley and frolick-y and shit on TV, where they solve problems, rescue kittens and do flips. In the wild, they're as big as Volkswagens and twice as fast. Not to mention totally evil and smart enough to really fuck with you.

then go get it from an expert: this post on dolphins' dark secrets by marine biologist Miriam Goldberg, who notes:

The scariest part is dolphins can wreak havoc day and night without sleeping. A recent study found that dolphins could stay awake for five days straight with no loss of mental acuity. The dolphins didn't even need to make up sleep at the end of the study, though the scientists sure did.

If the dolphins ever evolve thumbs, we're in trouble. It will be like a slasher-film remake of Douglas Adams' So Long And Thanks for All The Fish. If I wash up with pulped innards and dolphin tooth marks, you'll know why. After all, you never hear about the people the dolphins push out to sea.