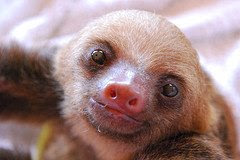 Research with the sloth in captivity has shown that it sleeps an average of sixteen hours a day, validating its position as the cutest personification of a deadly sin ever.

But our animal symbols for bad behavior lead a precarious existence. Call the wrong person a dirty pig and you may find yourself watching a beautiful metaphor beaten to death by a load of ugly facts. Your pig expert will claim that not only are pigs clean animals that only roll in mud to cool off and protect their skin, but that they may even prefer a pool of clean water given the choice.

In another stunning reversal of conventional wisdom, the blog Not Exactly Rocket Science reports on some new research from the Panamanian rainforest:

A new study - the first ever to record brain activity in a wild sleeping animal - reveals that wild sloths are far less lethargic than their captive cousins. In their natural habitat, three-toed sloths sleep for only 9.6 hours a day, not much more than an average first-year university student.

It may be some comfort to our cliches, though, to know that they weren't exactly revealed to be racehorses disguised in shaggy algae-supporting fur:

Rattenborg managed to study sleepy sloths by fitting them with a small, lightweight cap that was loaded with brain activity sensors. Sloths make a good first candidate for such an experiment, as they are easy to capture and their slow lifestyles are unlikely to dislodge the recorders.

Photo, from Flickr user acodring of a baby sloth at the Avarios sloth sanctuary in Costa Rica, is of a two-toed sloth, not the three-toed in the study, because I think they are cuter. So sue me.

Email ThisBlogThis!Share to TwitterShare to FacebookShare to Pinterest
Labels: sloth